Although I’m jobless, I’m not without a job. I’m staying busy and my latest practice tattoo in a frame was accepted and some Christmas funds were received early for bills mostly. However I ordered necessities and some supplies to continue my Tattoo Journey. Tattooing as an art, trade or way of life, requires so much time and with the creative revolution we are contributing to now in it, can consume everything you do (in a good way, we strive). So when one has an opportunity and it’s not their main income, it’s important to put in the hours. It’s not like riding a bike as the saying goes (at least not for myself). This time around I shopped at Painful Pleasures and finally bit the bullet on two DVDs focusing on hand tattoos. The series is called Tales From the Darkside by Carl Grace and I’ll be lucky to watch volumes 2 and 3. They are on sale too! Hand tattoos are no joke and the industry will tell you to do them last along with many other rules, but not everyone follows the rules. I also am going to try some biodegradable ink caps by Fellowship. I didn’t have much luck with the other brand and really hope these ones hold the various inks. I think the Hive Caps look awesome and almost fell for them this time, but it worries me with too many items going straight to the landfill potentially after use. Next I shopped at my favorite Asian owned shop in Houston and got these cool DipFoam things to try by Illusionist. The purpose is to clean your cartridges and with cheaper needles they often need more attention. I’m expecting this will solve my ink flow issues, especially since I’m cleaning and reusing needles many times. Never do this on actual skin tatoos by the way, but to save money it’s possible to rinse and soak in soapy water to avoid rust or hardened substrate.  Shea butter is buy two get one free on eBay and is awesome for wiping off ink from practice skin as well as aftercare. The other thing to save cash and the environment is, when you are practicing, to use fabric swatches instead of paper towels or Wipe Outz for example. Wash the fabric with gloves still on until the ink and ointment is mostly out, ring and dry on cardboard. I do prefer to use a Dude Wipe now after that stuff because it’s messy and frustrating when you are cleaning off the practice skin at the end. I’m also going to change glove brands and go with Shamrock because they have a zero carbon footprint and all natural latex will probably degrade quicker. Still sketching the Portrait of Girl with Long Pink Hairs by Elena Barenbaum and deciding if she’ll be the cover girl for upcoming release The Berklee and Virginia Years (2001-2007). That’s all for this update arriving just past midnight. It’s been a couple super busy days and I’m off to get some rest. Frankenbob arrived today and has already settled in with the rest of the characters in their bunks. Goodnight! 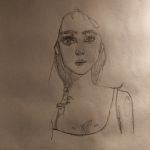